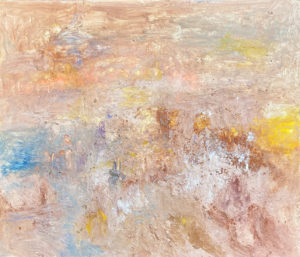 Chaya Kupperman crafts thick, rich compositions that remind the viewer of landscapes and street views while remaining staunchly and seductively abstract. She cites the influence of traditional Dutch landscape painting, whose horizontal vistas and gray-blue skies are major components of her work. Beneath these fringes of pale azure, she unleashes bold tones in overlapping and intersecting swaths, some applied in layered, diagonal brushstrokes, others tightly hemmed in by rectangular forms that suggest people and buildings.

Kupperman expertly avoids letting her work be pinned down as figurative, however, instead letting it float in an indeterminate zone, just as her most saturated tones hover against their softer surroundings. This intriguing quality is evocative and appealing, allowing the viewer to engage fully with each piece on their own terms, particularly as Kupperman confounds distinctions between foreground and background, object and setting. She trains our vision on the intricacies of pure chromatic interplay, the rich textures of her densely impastoed oil paints, and the multitude of images and sensations they conjure.